Do you have an idea for a tour in Wildwood?  Please contact the General Manager!  The cemetery is hoping to add tours to our inventory for the enjoyment of our lot owners and the general public. 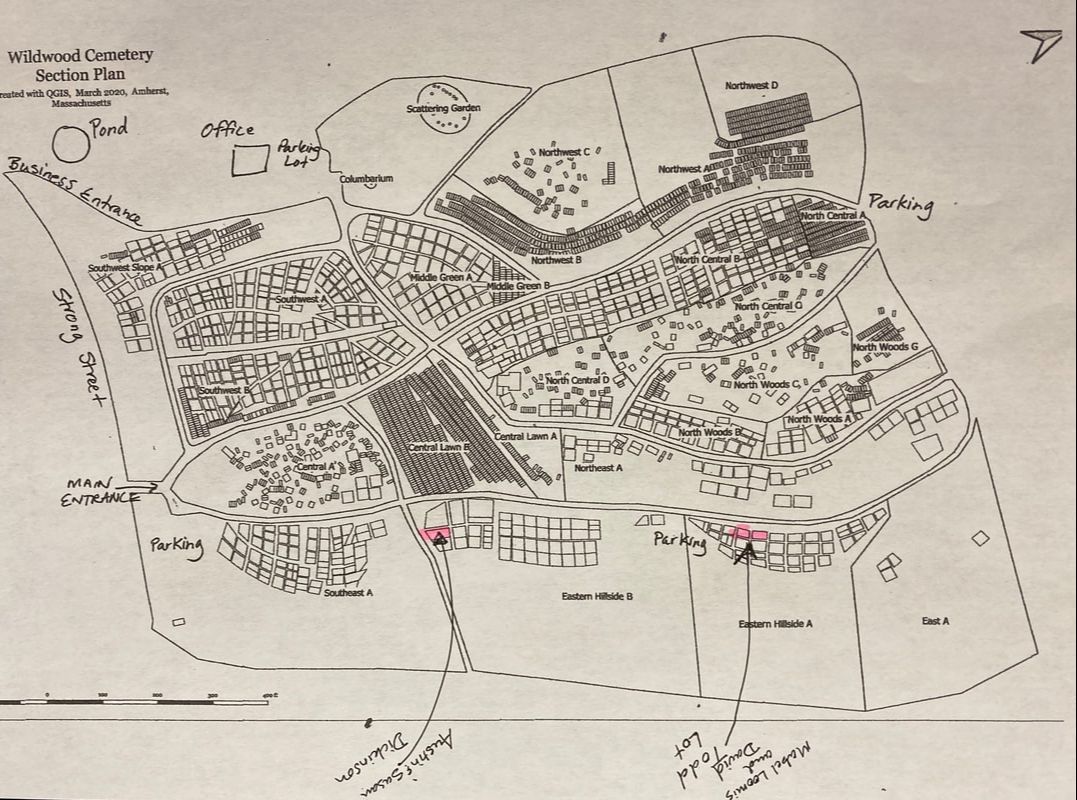 “We the people of the United States.” Which ‘We the people’? The women were not included.”
—Lucy Stone, 1853

Members of the League of Women Voters of Amherst (LWVA) did some research on the Amherst Equal Suffrage League in preparation for the 100th anniversary of the ratification of the 19th Amendment in the State of Massachusetts.  In the process LWVA members reached out to Wildwood Cemetery to see if our records showed any connections to the women involved in the local chapter.   Wildwood is honored to have four of the women who served on the board buried on our grounds.

“As Boston suffragist Lucy Stone so aptly pointed out, women—and all others besides white males—were left out of the US Constitution with no right to vote or participate in government. Stone dedicated her life to procuring women’s suffrage, and countless others—in Boston and across the nation—also joined the cause by organizing meetings, delivering speeches, and distributing literature for suffrage. They marched, picketed, set watchfires, were arrested, and went on hunger strikes to call attention to their cause, hoping to open minds and move hearts.”
- https://bwht.org/road-to-the-vote-the-boston-womens-suffrage-trail/ (Very cool Suffrage tour in Boston.)

What should be noted is that "...even after that (the passing of the 19th Amendment) milestone, millions of people — women and men alike — were still excluded from the vote, as many barriers to suffrage remained.  The fight over the amendment was not just about sex; it was also deeply entwined with race.  Click here for more information.
​
Many thanks to the Amherst League of Women Voters for sharing the following research with Wildwood.
​
This quote from a letter between Edward and Austin Dickinson gives you a sense of what women were up against in their fight for the right to vote.

Dear Austin,
…This forenoon, I went into the Hall of the Ho. of Reps. to hear the Women’s Suffrage people argue pro & con,-- heard some women speakers on both sides – some sentimental, some belligerent, some fist shakers—some scolds—and was disgusted with the class of females which gathered there. I hope we shall soon have a chance at the subject, & begin to clear off the scum—they don’t expect to get what they ask, this year, as most of them say, but threaten to agitate & agitate till they find a Legislature weak enough to report in their favor."
…  (Followed by other news) 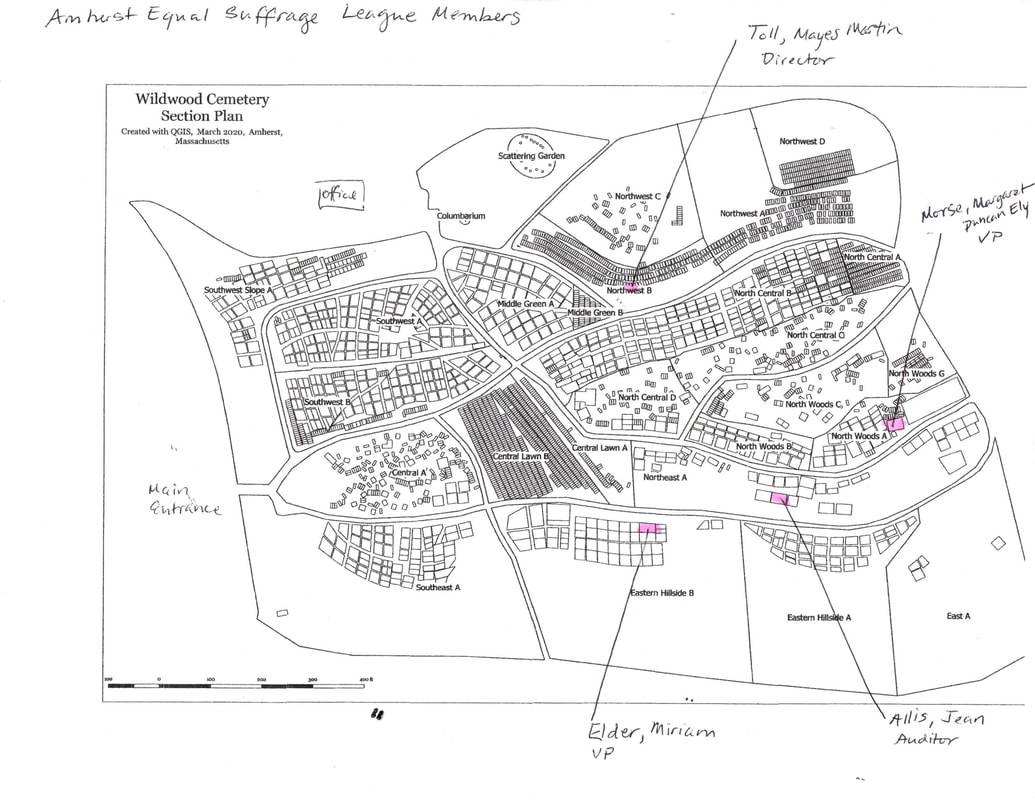 To print the map click on the document below.

Download File
Tour of One - Josiah Hasbrook
Josiah Hasbrook Jr. (1841-1915) was the son of Montauk Indian parents who were slaves of a white man named Josiah Hasbrook who owned a farm in Fishkill, NY.  When Josiah and his parents were freed they moved to the Adirondacks where they met the family of Abolitionist John Brown in upstate New York.  Josiah was tutored by Brown’s daughters Sarah and Ann and his family taking part in various communal experiments to empower former slaves as farmers and landowners. Indeed a young, brash Josiah was present at John Brown's hanging at Harper's Ferry and he escorted John Brown’s wife to California to her surviving son (the other sons were hung with their dad). Josiah then served in the U.S. Colored Infantry (29th Regiment, Company) with a number of other Amherst African-Americans, fighting in battles throughout South Carolina. Josiah and his wife Jane Hazzard moved to Amherst in 1897 and lived in a house on Baker Street. Josiah served as a mail carrier in town and led the local chapter of the Grand Army of the Republic (G.A.R. - which was an old school version of today's VFW, but for Union Civil War soldiers).  Josiah and Jane had two children Carroll and George who were listed on the tribal roles and Montauk Indian.

Philip Hasbrouck (1870-1924) also buried in Wildwood Cemetery. The University of Massachusetts has a massive Physics laboratory named after him (Hasbrouck Lab). Philip’s great-grandfather was General Joseph Hasbrouck of upstate New York. Lo and behold, Josiah Hasbrook’s grandmother was a slave of General Joseph Hasbrouck! So Josiah Hasbrook, descendent of a slave, and Philip Hasbrouck, descendent of the owner of that slave, both lived in Amherst at the same time. Were they aware of their shared history? Did Josiah deliver Philip’s mail? They are buried a stone’s throw from each other in Wildwood Cemetery!

Cinda Jones, whose great-great-grandfather is Walter Cowls who owned the land used to create Wildwood Cemetery, painted a folk art mural of Josiah based on the photograph of him from a Memorial Day ceremony in Amherst in 1895.
-- Many thanks to Baer Tierkel and ancestral-bridges.org/ for their research.

AMHERST — A portrait of a 19th-century African-American who grew up in New York in the family of famed abolitionist John Brown now adorns a barn in the Mill District in North Amherst, part of an effort to incorporate art installations and storytelling into the neighborhood.  Click here for the rest of Scott Merzbach's article about the unveiling of Cinda's Hasbrook portrait. 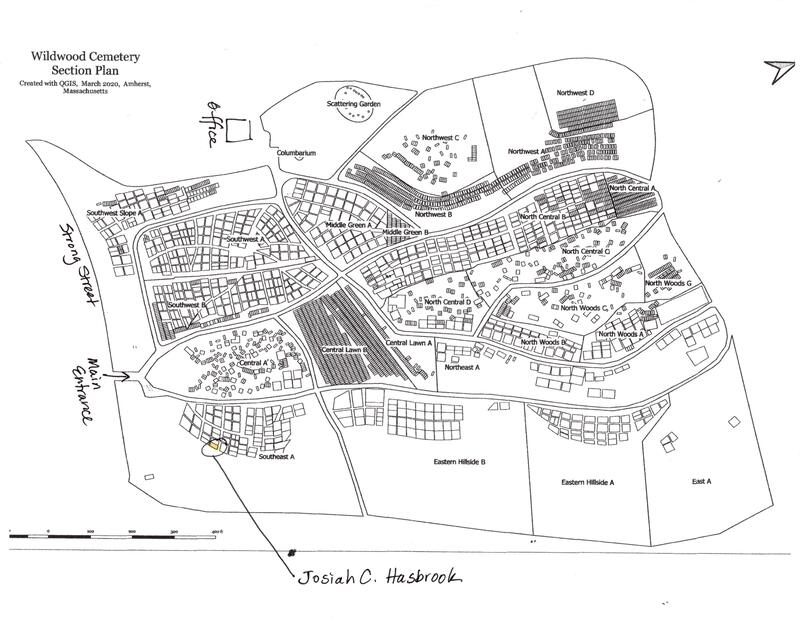